Until 2011, OOH was not reliably measurable. In the past impressions were measured based on daily traffic counts showing the average number of people who could have seen your message. This historical measurement showed how many times a person 18 years or older passed by an OOH display, rather than how many people actually saw the ad. Reporting was only possible with inflated impressions that were not entirely trustworthy, and based on audience buys that were not standardized across suppliers. This made the medium primarily a vanity play.

However, in today’s world, a reliable OOH rating system provides OOH advertisers with credible metrics comparable to other media channels, meaning that you can target similar audiences across all of your marketing efforts. Mathematical algorithms integrated into OOH measurements paved the way for reliable audience measurement, allowing a per-person count of who actually saw an advertisement, rather than who simply could have seen it.

How is this possible? Research and expertise in the areas of circulation, visibility and eye tracking research, demography and trip modeling and the building of powerful reach and frequency systems now help accurately provide Target Rating Points (TRPs), reach and frequency, revamping the “oldest form of advertising” to a proven media that integrates into your other advertising efforts and can provide proven ROI.

This article will explain the basics of OOH measurement and key terms that you need to know to measure the effectiveness of your next outdoor campaign.

What is the Difference Between Universe and Audience?

Universe is the total population base or total potential size of a given target population and can be used interchangeably with the term audience depending upon the application. The universe contains everyone who could be exposed to your ad whereas your target audience is the demographic group that you are trying to reach with your message. For example, a brand is promoting a new online video game with a target audience of adult males 18-25 (M18-25), but the universe of those exposed to your advertisement would be all adults 18 and over (A18+).

Reach is how many individuals were exposed to media in your campaign at least once. This is calculated as a percent of the universe and includes those in your target audience and anyone else exposed to your ad campaign. This percentage is unduplicated, meaning that each person who views your campaign is only counted one time, even if they experience your campaign on multiple occasions. Thus, this number can never exceed 100%.

Reach allows advertisers to measure consistently across all media channels, which helps advertisers chart a clearer path to increasing that reach and overall growth potential. Look at the example below to gain a better understanding of reach. For simplicity’s sake, let’s say you are running an outdoor ad for your new online video game in an imaginary small town that has just six residents within your target audience of males 18-25.

During the first week of the campaign, four people see the campaign (67% reach). In the second week, three people see the campaign (50% reach), but two of them had already seen the advertisement the previous week. In this two-week campaign, gaming company managed to reach five out of the six people in the imaginary micro town for a total unduplicated reach of 83%. In OOH, advertisers are usually seeking a total reach of 60-80%, which means that your online video game campaign is performing well in this market. 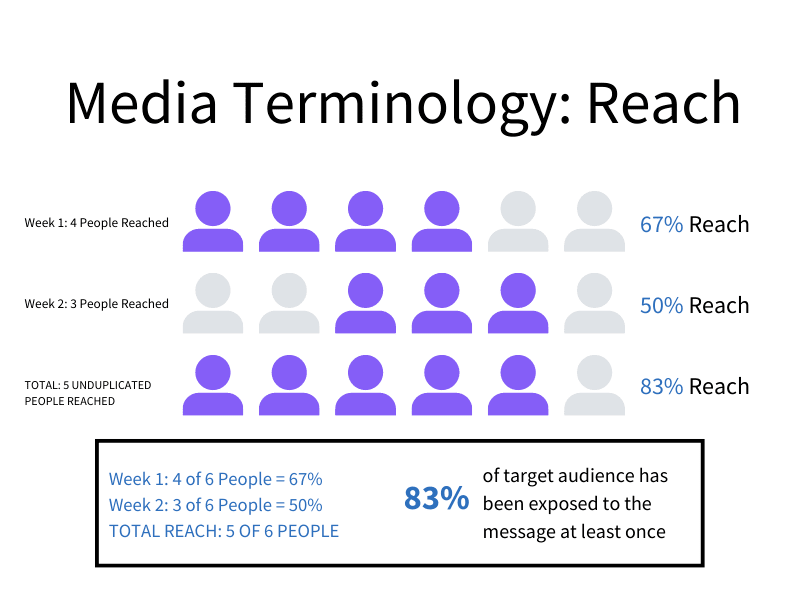 Although OOH can be a standalone vehicle, combining it with other media channels can be a useful tool to boost the frequency of a larger integrated campaign.

Frequency shows the average number of times an individual is exposed to an advertising message in a campaign. The more times your audience is exposed to your message, the more likely they are to take the desired action in your campaign. Typically, a message must be experienced at least three times to be effective, called the Effective Frequency rate. Some advertisers may choose a higher effective frequency goal of 5 or 7 touches to ensure their message is seen and understood. 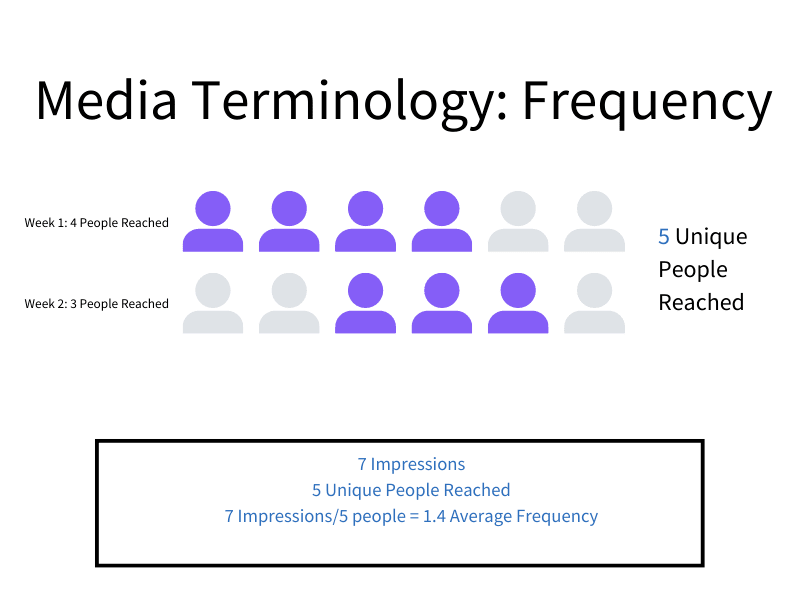 Frequency is calculated by dividing the number of target audience impressions or TRPs by Reach.

Using our example from earlier, we can see that there were 4 people reached the first week and 3 people reached the second week. This is a total of 7 impressions with 5 unique people reached. 7 impressions divided by 5 people gives us an average frequency of 1.4. The average campaign length in the US is about 4 weeks, so perhaps if this campaign had run longer it would have had closer to the effective reach rate of 3 or higher.

What are Impressions? What are TRPS?

Targeted Impressions are the numerical count of how many times people in your target audience are likely to notice an ad on an OOH display, and the audience from which Target Rating Points (TRPs) are calculated. It includes every time that someone is exposed to an ad and thus can count the same people more than one time.

Campaigns are typically bought on a TRP level. TRPs are your target audience impressions shown as a percentage of the market population. One TRP = 1% of the target audience. As this takes Frequency into account, this number includes duplication. For example, an advertiser may buy a Weekly 50 TRP program. In US campaigns, which typically run for four weeks, this would come out to 200 TRPs for the duration of the campaign.

At Billups, our clients usually come to us with impressions goals rather than specific TRP goals. If a client wants to meet 1,000,000 impressions, then we ask suppliers to present media formats that fulfill that impression goal based on the TRP level needed to reach the goal. However, the terminology is useful to advertisers seeking a greater knowledge of how OOH goals and measurement are set.

TRPs are calculated by multiplying the reach by the frequency divided by the universe times 100. 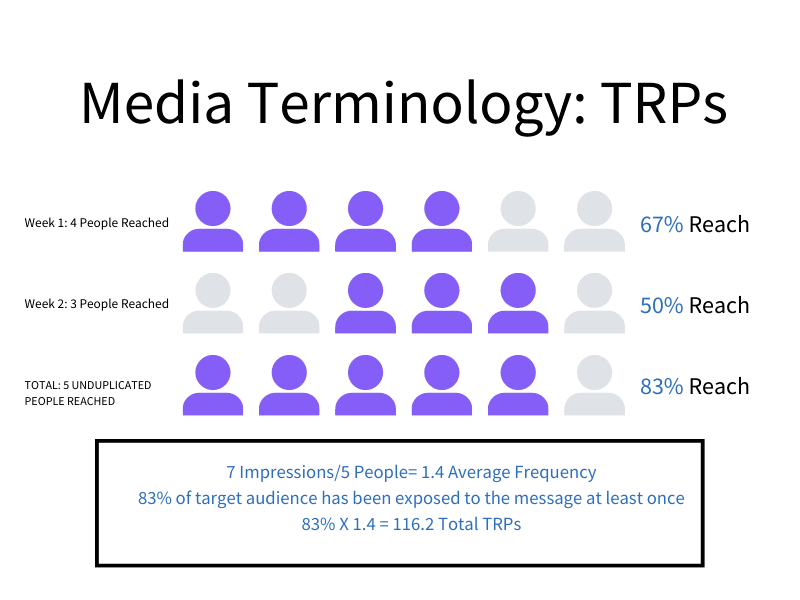 Using the online video game example once again, the targeted audience market population was 6 males ages 18-25. The reach was 83% of this population and the number of impressions for this campaign was 7. The frequency of the campaign was 1.4 as mentioned earlier. Multiplying the reach (83%) by the frequency (1.4) and multiplying by 100 for a whole number we get 116.2 TRPs.

What is the Difference Between an Impression and an Exposure?

Though the terms can be used interchangeably, OOH impressions are usually based largely on estimates and traffic patterns. In OOH, impressions are used heavily in planning, whereas exposures are more frequently used for post-campaign attribution. Exposures are validated by mobile devices and modeled to represent the market as a physiological or behavioral measure of actual eye contact with an OOH media unit and its advertising.

How Billups Helps you Measure Results

OOH advertising can stand alone, but it also enhances the overall effectiveness of a media mix by broadening reach and frequency while bridging the gap between advertising messages delivered inside the home and purchases made outside the home. As OOH measurement continues to evolve and become more credible, OOH advertisers can continue to increase their faith in the medium.

The Billups team can help you with:

We love OOH advertising and want you to understand how it is measured so that you can build more effective OOH campaigns.

Contact us to get started on your next OOH campaign today!